Hi, and Happy New Year to you all! I hope those who celebrated Christmas had a great one, and the rest of my readers had a good time anyway.

Among my resolutions are to try and use more diagrams, images and photos on OrionRobots, and to try and photo document my projects more often.

In terms of Christmas goodies, among them was a Maplin PIC Programmer Velleman kit. 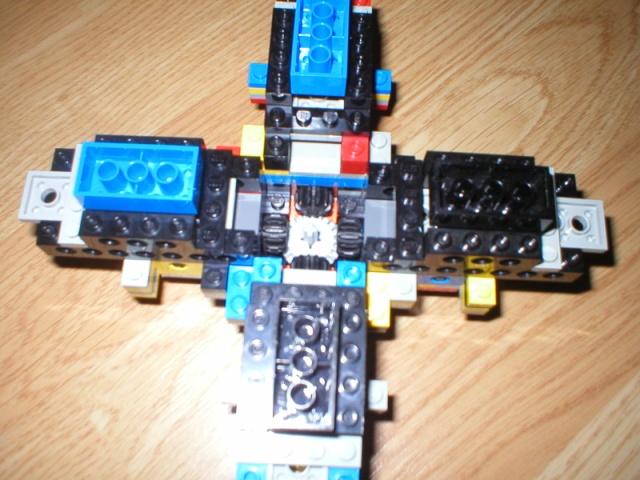 I am yet to document my lathe progress properly. Over Christmas, I worked on a four jaw chuck mechanism for it - all in Lego. It is quite an interesting mechanism - and I will be posting photos, and LDraw CAD designs for it when I find a moment.

More photos of the Chuck Mechanism

I have many other photos of the Lathe and need to get them online. I have realised that I need to rebuild the bed and the headstock, as my initial design involved a driven headstock and tailstock, which turned out to be too complicated, but the vestige is a headstock driven from a drive system in the middle of the bed via three axles distributing the high torque expected. This unfortunately is in just the right place to pick up the chips from the part being turned. It uses two Technic gear motors joined by a differential to drive the headstock, and I expect to keep much of the torque system similar when I do the rebuild. The bed also needs to be bigger - having been resized upwards twice already. The four jaw chuck turned out to be much larger than I expected. I would like to try and scale it down, but try to retain the clamping freedom of movement. It will have to be mounted on a Technic turntable, as a single axle may still pose torsion issues.

I am also expecting to replace the RCX based cutting arm system (using Cybermaster touch sensors for calibration) with an NXT system, so I can reduce the complexity by delegating it to the NXT motors.