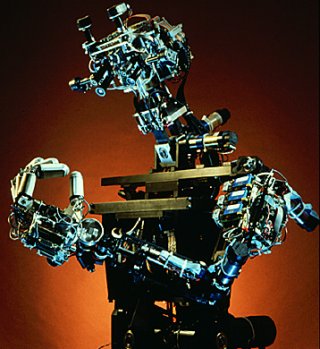 Cog is another creation of the well known Dr Rodney Brooks. It uses his Subsumption Architecture to model a humanoid torso and head, with behavioural as well as mechanical emulation. One important aspect is to be able to move the eyes, and head in a fairly similar way to ours. The name Cog is likely to be derived from Cognitive behaviour, the ability to recognize, or at least behaves in a way that looks like recognition.

Cog has special visual sensors consisting of two sets of cameras, a low-resolution set, and the “foveal” high resolution cameras. The lower density provide wide angled vision for getting the largest number of cues from surroundings, while the foveal allows the greatest detail to be distinguished from the focus of the cameras much like our own vision.

Cog’s arms have hands with multiple digits capable of grasping objects. By combining its visual system, recognition behaviour, and its dexterity, Cog is capable of easily following an object with its eyes and pointing.

Subsumption architecture technology subdivides a robots behavioural systems into small and simple functional units which come together to make a complex whole, instead of trying to tackle the whole robots as one large problem. This bite-size and modular approach has many advantages - single modules can be redesigned and replaced easily, parallelisation of the design allowing a team to work on it, parallelisation of the actual behaviour allowing more responsive robots and modules can be individually unit tested and debugged to name a few.