An electronic Valve, also known as a Vacuum Tube is the same technology as the TV - all are known as Cathode Ray Tubes. However - in recent parlance, when people say CRT, they normally mean the TV.

They were the original system for allowing one electrical signal to control another, and made way for amplifiers - to be used in radio, audio and sensory technology, and logic gates - to be used in computers. They have now been long superseded by Transistors and Integrated Circuits.

Now although in conventional theory it is taught that things flow from positive to negative, the truth is that it goes the other way. So the Electrons flow from Negative To Positive. Electrons also exhibit behaviour as both an energy form and a particle. This was demonstrated by the Crookes Tube - with the famous imagery of the Maltese Cross projected on a phosphor screen.

There consisted (as their most basic form) of two electrodes - an Anode (the positive electrode) and a Cathode (the negative electrode). The cathode is stimulated usually by heat or an electromagnetic field to emit electrons. These then jump a gap to the anode. The gap created by a vacuum is fairly big, and large potential voltages were needed. Certain chemical gases were used as well - which allowed lower potentials to be used. because of the heating, it would mean that the voltage would only pass one way through these - which were the basic Diodes.

The real fun starts when a third electrode was introduced - known as the grid. It was a plate with a grille cut into it, placed between the Anode and the Cathode. By altering the potential of this plate, it was possible to make the electrons jump the gap easier, or make it harder - thus allowing the electrical potential to control the flow of another electrical current. This grid is the equivalent of the base in the modern Transistor. These were known as Triodes.

All manner of interesting vacuum tubes came out, things like pentodes and so on with more than one grid, as well as tubes with phosphoresence (cause stuff to light up) which were principles used now in TVs, Oscilloscopes and Flourescent Lights.

William Grey Walter’s Machina Speculatrix were quite visibly built using a couple of relatively sophisticated valves. Some of the more complex achievements were done with hand blown glass and handmade contacts.

When used in early computing and robotics, they were a little unreliable, and needed to be manually changed fairly often. Computer facilities were staffed by people running around like ants trying to keep them working. Because they were based on a mixture of Valves and Relays, then bugs really meant bugs - insects that got in and shorted circuits, or stopped relay levers moving. In that volume they also required huge amounts of power and heat. 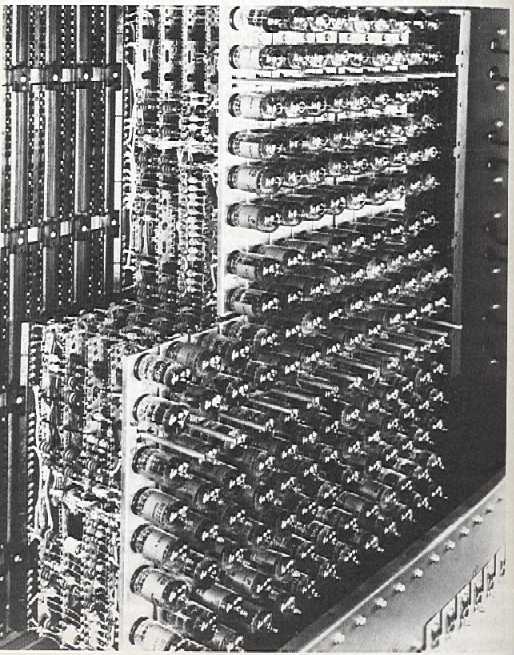 An Early computer - based on Valves - This is the Tube based memory of an IBM 701 Defence Calculator in 1951. It is capable of storing vastly less than your mobile phone and probably has a million times less computing power than you carry on you most days.

When people build their own audio kit, be it amps, or something as complex as a Theremin, they commonly make a conscious choice to use Vacuum tubes. This is because their characteristics as amps an active components in oscillators are slightly different from transistors.

Transistors give a very clean, undistorted sound, but also may clip (that is cut off the top and bottom) audio signals too. Some of the noise introduced by the tubes was until recently, fairly hard to reproduce, and systems without it sounded flat - or empty without it. It would kind of be like the difference between a real piano and an electric one. That is not to say transistors are bad for audio, they just give a different sound.

It is for this reason that in audiophile magazines you can still purchase kits of these.