An LED is a special version of a diode which emits light. Although nearly every PN Junction emits, and is sensitive to light, these junctions are specially mastered to emit more. 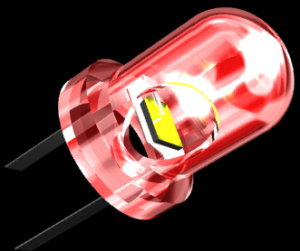 A FLED - Flashing Light Emitting diode is a special version of these which has a built in flasher circuit. You may find these which flash in one polarity, and light continuously in the other. They can actually be used to replace whole sections of small control circuits because of their unique properties.

LEDs are available as single lamps, or as whole displays. You can have Alphanumerical displays, Matrix Displays, and there are companies that specialise in custom or unique displays.

They are available now in a whole range of colours, including lamps with more than the usual two electrodes - allowing you to colour mix, and get RGB effects.

The technology is currently improving to allow super-bright LEDs which can replace household lamps with device that are much cheaper and more efficient.

Their use in small devices however - has been undone by the march of the LCD. However - the oLED - organic LED may bring back the crown, as new technology may allow people to literally print off custom displays with a few mods to a printer, while offering far greater density than LED’s normally could. As OLEDs may turn out far cheaper, as well as having much faster response time than LCD or Plasma - they may replace the technology in screens. They also do not need backlighting, and would be flexible - giving TFT devices a kick in the teeth. Luckily for LCD manufacturers - it may be a few years before this technology is commonly available.

Yes, you are not mistaken, this article genuinely said that LEDs can also be used to sense light. You see, that PN Junction is also sensitive to light as well as being able to emit it. Light can be used to ‘aid’ the electronics across the ‘gap’ at the junction - by giving them that extra bit of energy. So by amplifying them a lot, you get a cheap sensitive photodiode.

This means that they can be used as eyes when constructing Headbots or other BEAM Robots.

This particular property of all silicon junctions can be taken a bit further. If you get a CMOS chip, for example an EPROM chip, and remove the protective cover.or sticker, you have yourself a crude CCD - a camera. So old junk chips - the ones that look like they have little windows to the inside, are actually still useful for something.