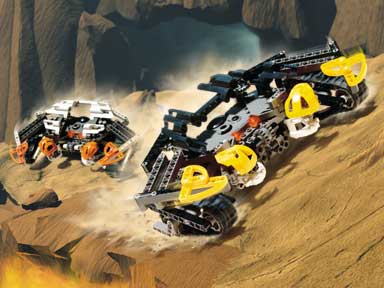 
The remote control system they use is Infra Red so they can be interfaced with devices like the Lego RCX with some sneaky programming (download the code below).
It is directly compatible with the Lego RC car, and the SpyBotics kits - where the remote controls for these are interchangeable.

The two fixed motors each have two outputs, one out to the side, and one through the front to back, where an axle can be passed. The actual units are fairly wide, or long and asymmetric (using them the other way up) which can make combining them with models a little difficult.

The default robots built from the set and its instructions are good fun for quick battles.

When combined with other sets, these are quite handy for building quick sumo robots with, and were used by OrionRobots for some of the challenges and events at the East Finchley Robotics Club.