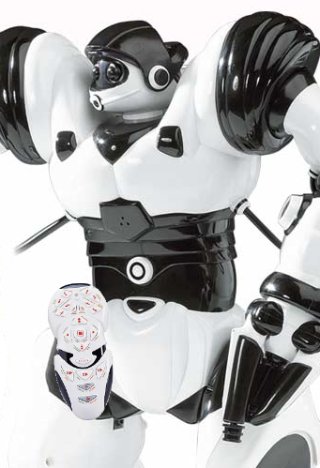 The Wow-Wee Robo Sapien is a robot toy or gadget created by Mark Tilden. It comes with a remote and has a number of great features.

The RoboSapien is currently taking the robot toys and gadgets market by storm at the moment. It is designed to be modded and opened up, but can also just be great fun to play with as is. A good starting point if you are interested in using a bipedal platform and want to skip some of the process. It is programmable and functional out of the box. RoboSapien stands at around 35 Cm tall.

Robosapien is bipedal and walks properly with no tricks. Robosapien has hands and arms with enough Degrees of Freedom to grasp things in them. Using 7 motors gives it a fairly flexible and lifelike motion.

It can perform whole bunch of actions like karate kicks, punches, dancing, sweeping, fetching, high-fives, throwing and boasts around 67 different moves. He has obstacle avoidance sensors in his feet.

It has some very basic programmable functionality, and also makes comedy sounds to keep kids amused. Unfortunately, without hacking him you cannot create your own functions for him. However because it is well designed and the methods of construction used, for a robot builder, it is very hackable.

It is designed using “Applied BioMorphic” robotics. This describes robots that have features and functions to make them seem like like living creatures. Although the RoboSapien achieves this fairly well, it is not the first robot to feature this. It is among the first commercial toys to feature such style. The Robosapien is a great toy - and anyone who feels like donating one to OrionRobots would be very welcome!

Now it is a little dated, you might be able to buy one for around £40. Robosapien has now been superseded by the Robosapien v2. OrionRobots is not sure about how hackable it is, as that was one of the original advantages of the v1, nor the other spin offs like the robosapien dog and the roboraptor.