Chaos 2 was one of the most infamous, and formidable flipper bots from the original UK Robot Wars.

It was immensely powerful, and was a reigning champion of Robot Wars for some time. It also appears a little more compact than some robots - meaning there was less room for things to fall off and rattle. In an impact - the less moving stuff you have, the better your chances are(okay - thats vastly simplifying it - but hollow spaces are more easily broken).

It used pneumatic compressed gas systems to fire off its flipper, and boy did it fire, in fact, it was capable launching other robots out of the arena.

I wonder what George Francis will be doing next? 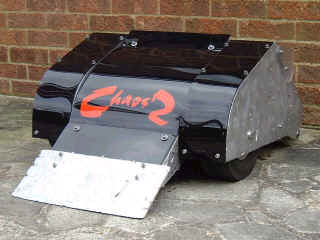