Dead Metal is one of the Robot Wars House Robots. At a relatively light 112 kg, his gripping claws are a menace to robots not fast enough to elude his grasp. Once he has you - his usal tactic is then to sink his 3000 Rpm Circular Cutter into you. Nice…. I love to see the sparks fly when he chomps into some poor wandering contender - thus living up to his namesake and rendering them into dead metal.

With a top speed of 112 mph form his battery driver motors, he ambles like some monstrous nightmare crustacean accross the arena. He is 70cm high, and 160cm long by 100cm wide. Impressive stats - but still dwarfed by his big brother Sir Killalot.

He has spikes and ribs for armour, with some mesh to fend off lighter blows. The meshes are not all that strong, and quite a lot of his tender insides are exposed - an attack from above at the rear would be quite effective. He also has slightly high ground clearance - exposing him to a good flipping. 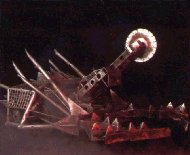 He has been known to loose his cutting wheel - sending it flying across the arena before.