This was in its first season an absolute shocker of a robot on Robot Wars.

Hypnodisk had a large rotating wheel, which once spun up(it took a while because of the inertia), become one of the most feared weapons in the arena. It had two spikes on it, and at full speed it would rip other robots to peices - or strip their cases off them.

It is one of my favourite contenders - especially when I was thoroughly bored of flipper type robots. 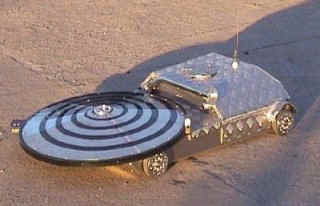